According to the Whitman, Axland & Cutten Golf Architects website, strategic design coupled with great contour (either natural or manmade) is the essence of golf architecture. The statement is part of their mission.

It sounds simple enough right? But the key is finding the ingredients which when combined, along with a strategic approach, turn out the product the designers were working towards.

It appears WAC Golf found what they were looking for in the shadows of the Monashee and Selkirk peaks at Revelstoke. The goal was straightforward; to find the best 18-holes for golf that the site, which sits at the base of Mount McKenzie, could offer.

This mission is the third project Rod Whitman, Dave Axland and Keith Cutten have been involved in under the Cabot banner and Revelstoke was viewed as an opportunity to do more of the same.

“This is another example of an unbelievable piece of ground that’s on this natural bench below beautiful mountains overlooking the Columbia River valley,” said Keith Cutten. 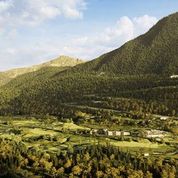 He said the long sweeping views over the bench which overlooks Williamson Lake, is elevated slightly from the valley floor. This is the canvas they get to work on developing Cabot Pacific.

“It’s not on the side of the mountain, it’s more akin to what Canadian mountain golf is known for,” said Cutten, using the spectacular Stanley Thompson designed courses at Jasper and Banff as examples. A lofty comparison but one which they passionately believe in.

Whitman stated he is critical about a lot of sites, but he says there were a few green locations they “discovered” over time when viewing the property at Revelstoke and it made an impression.

“I just went, wow, I think we can do something pretty cool here. So, when I start looking at it, I’m thinking this is going to be pretty exciting and when you get excited, you’re going to have fun and you’re going to come back. It’s all those things,” he said.

Whitman admits what gets his adrenalin flowing is the golf aspect of this site and the greens they might be able to build plus the vistas which compliment the design.

Routing a golf course is not something which just happens according to Whitman and he should know, having done this for quite some time. Cutten says his partner is a genius when it comes to figuring it all out, using Sagebrush GC in B.C. and Blackhawk in Alberta as shining examples of tough sites and putting walkable golf courses on them.

“It takes some creativity to find how to get people on a walk that’s enjoyable yet discovers all the attributes of the property that, if you were just walking it, you’d want to do it and that’s really the essence of a good golf course and good routing, “said Cutten, getting to the most interesting parts and not missing anything.

With this piece of land both Whitman and Cutten feel they have plenty to work with and can make use of the land efficiently so you will not need a map to find your way to the next tee.

They have spent more than a few days walking the property and really getting to know the place. The topographical maps are helpful but getting boots on the ground to find the key elements and how to use them is quite valuable, said Cutten.

Whitman says there are a few spots which he says they came across more by accident than good sense, but they are spots which will be remembered by golfers when they reach those points in their round.

“Number eight is a par three which plays across a chasm that if there was an ocean below you it would resemble Cypress Point (hole #16),” said Whitman. “There’s no ocean here but there is a carry across a pretty spectacular piece of ground.”

Of course, it is not just one hole which will stand out when it comes to Cabot Pacific as both excitedly pointed out. 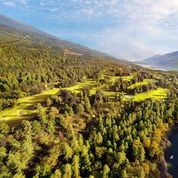 “It’s just using those natural terrains to diversify the holes so that every hole sort of stands out in your mind,” said Cutten. “If we can do that so that every hole is a distinctive adventure within an overall traverse through a really interesting, beautiful landscape and all aspects are there as well, we’ve done our job.”

Because it is mountain golf, there are areas where dirt needs to be pushed around in order to achieve the desired result but Cutten says the key with this one is only moving what you need to, not forcing anything into the site.

“What you do move you make it look like you never did, and that’s what we’re really good at,” he said.

The length of Cabot Pacific is another element which needs to be considered but Whitman says this will not be a stretched-out monster which only the best of the best or the longest of hitters can tackle.

“The way I think is for the average golfer, for 95 percent of us, the golf that we have built and will build is still fine,” he said. “I mean we’re not trying to build for the tour players. I think what’s happening out there (PGA Tour) is just off the wall, so I don’t even try to think about those fellows anymore.”

At this point it has been pencilled out at around 7,000 yards but Whitman says it could be shorter as they start moulding the holes.

The vision for Cabot Pacific is summed up by simply stating it will reflect the setting with large greens, wide fairways and bold bunkering, according to their notes.

With a world class ski resort at Revelstoke Mountain and this addition to the solid reputation Canada has for mountain golf, the region will become a year-round destination for those who love the outdoors. The business plan includes a 150-room lodge and real estate.

Completion is expected by 2023 and for many who love golf, that date cannot come soon enough.

Jim Claggett - September 4, 2016
0
The curtain came down on the 21st season of the McLennan Ross Junior Tour, Presented by Crowe MacKay, at Wolf Creek Golf Resort. There were 118 players...