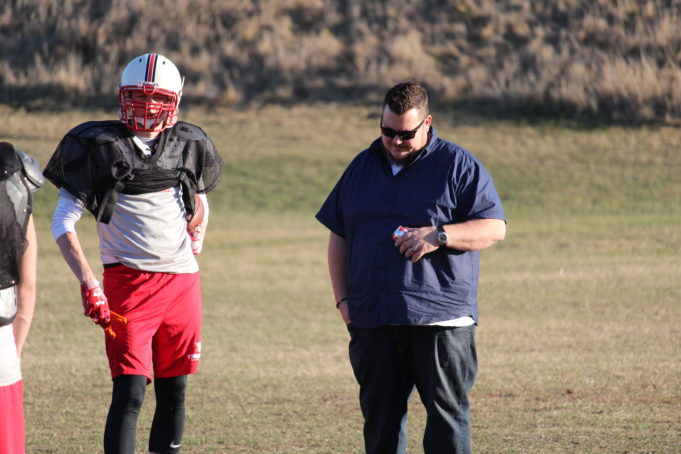 There isn’t much in the world of football which catches Lindsay Thurber High School Head Coach Aaron Shepard off guard. He says he makes a point of being prepared and then getting his team ready for a game.

He has spent most of his life playing and coaching the sport, so he has seen plenty.

But he was caught off guard earlier this month when he was named the Tier 1 Coach of the Year by Football Alberta.

“I knew they had awards, but it wasn’t even on my radar,” he said about the honour normally handed to the coach of the team who wins the Tier 1 title.

While Shepard and his Raiders did not win the championship, it may have been the body of work over the years which garnered the acknowledgement.

Three years ago, Lindsay Thurber didn’t win a single game. The next year they won once but showed well in other games which could have gone their way.

Last year the Raiders were a strong team, making it to the Tier 1 final, beating Grande Prairie in the semi final game 55-10 and losing 49-21 to the top-ranked Harry Ainlay Titans in the last game of the year. 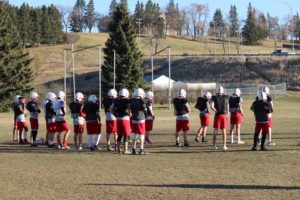 So, what caused this turnaround of the program? Well, Shepard’s fingerprints are all over this blueprint.

Shepard says he and his staff put in the time to change the culture of the team for these young men to grasp the concept of how to win football games and be better people at the same time.

“There isn’t a sweeter thing in life than learning to find joy in doing something that helps somebody else at your expense for their benefit and succeeding. We had workhorse kids that picked up that idea and really ran with it.”

He pointed to a game against a talented Centennial team from Calgary as a watershed moment for the Raiders. They pulled out a 13-10 hard-fought win and things just snow-balled from there.

“Suddenly, that culture, the kids started getting it and started to think, wow, we can compete against them,” he said.

Shepard was quick to point to his assistant coaches like Devon Hand, Kerry Lynch and Brandon Leyh as big reasons for the Raiders success in regular season and playoffs.

Of course, he had his own coaches growing up which helped mould him into becoming the coach he is today.

Bob Vanderwater coached alongside Shepard and Jay Heatherington was his head coach at Lindsay Thurber. He says not only did they teach him plenty about the game, but both played a part in putting him on the right track to become a good person. 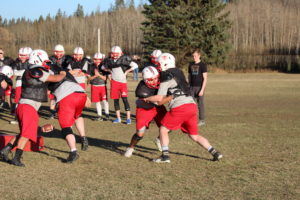 He has carried the same thought process into his own coaching philosophy over the past two decades.

“I coach football to help produce good young people. My life was changed forever through football,” he said. “I always say I’ll lose every game if the kids develop into good people.”

It appears he’s got the best of both worlds with solid kids emerging from a winning program.

Minor Football on the Rise in Red Deer

Jim Claggett - September 9, 2015
0
A seed that was planted years ago for young boys and girls in Red Deer has blossomed into a solid base for the sport...