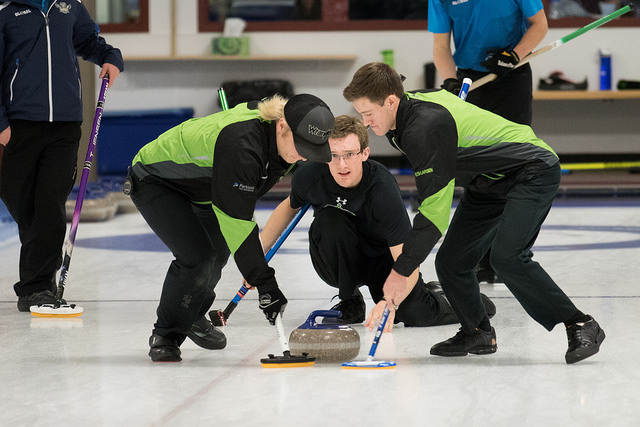 It’s déjà vu all over again for the curling teams at Red Deer College as the men’s, ladies and mixed squads will be involved in ACAC provincial play this year.

Last year the women took home silver while the men and the mixed team captured bronze so coach Brad Hamilton is looking to improve on that this year.

Hamilton says there is some carry over of players on each team with a sprinkling of rookies but for the most partit’s a playoff experienced  group of curlers heading to Lakeland College in Vermillion this year.

At the winter tournament the men’s team went 10-2 to dominate their division, the women went 6-4 to place second and the mixed team posted a solid 10-4 record.

The Kings are skipped by fourth year player Ryan Dahmer who Hamilton says is rock solid. 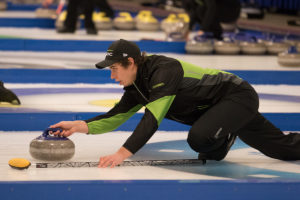 “He’s as cool as they come or he sure acts like he is. I don’t know whether he is inside or not.”

The men’s team is a very competitive bunch which went undefeated for a good stretch.

“I was kind of hoping they would have lost (in the first round) so we could get that kind of out of the way. They didn’t want to lose. They weren’t happy when they lost but I was,” he said.”I kind of wanted to get that loss out of the way before it happened at provincials and I wanted to see how they would react. They didn’t want to lose any more after that.”

On the women’s side of the ledger there were five teams competing for a berth and Hamilton says all five are very even with maybe Concordia having a slight edge.

The Queens are skipped by Marla Scheerer who is in her third year and so brings some experience and comfort. 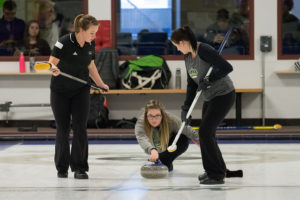 “I know how she plays and she knows how we want to play. They’ve struggled a little bit with consistency, ” he added.

Due to the make-up of each team Hamilton says they bring their own styles to the game but he’s been linked with Dahmer and Scheerer for a long time so his insight into play is a little keener.

“The other day there was a shot and someone said she’s (Scherrer) not going to play that shot and I said oh yeah she is.”

Jason Anderson handles the mixed team coaching duties and Hamilton says they are in good hands with him. The mixed team is skipped by Shane Copeland who played third last year. 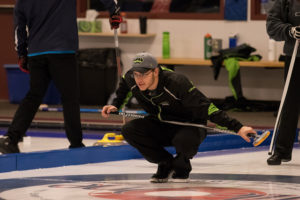 The mixed team went 6-1 in the first round and 4-3 in the winter session and Hamilton says they will be facing some good teams at ACAC’s as schools without a men’s or ladies team will “stack” their mixed unit.

He says his goal every year is to get all three teams to provincials and we’ll see what happens once they hit the ice.

“I think it’s a little cyclical, you get lucky. We don’t get too many players with four years so to get Ryan for four years makes it easier when the new guys come in and you go, this is how we play and we expect to make it to provincials. It’s easier for the new guys to just jump on board I think.”

Staying sharp over the gap between the winter round and provincials is accomplished by playing in Red Deer leagues as well as the Lacombe Super League.

The teams get to see some very good competition on a regular basis which helps them to stay game ready as opposed to just practicing.

Curling Academy Is In The House

Jim Claggett - March 18, 2016
0
The success in the sports world continues for Red Deer College as not one but two curling teams are headed east to compete for...