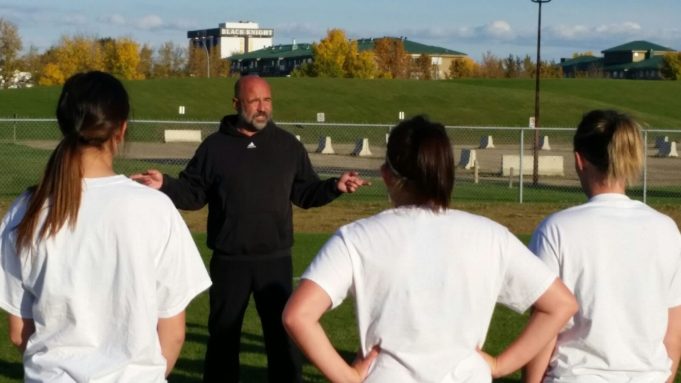 David Colley has seen plenty in his 17 years as an assistant and head coach of the Red Deer College Queens soccer team but this will be his final year standing on the sidelines coaching and watching.

“I’m starting to coach people who probably weren’t born when I started,” he said with a good laugh.

He was an assistant coach under Jerry Gerling when he began and then Dave McCarthy took over the reins. Both of those coaches made changes to the program under their guidance and Colley says he’s now taken the girls about as far as he can in his opinion.

“Last year we had the team that probably could have made nationals,” he said.

But instead of going out on what might be considered a high note last season, Colley is back patrolling the sideline with a young squad which has some potential. He says the signs are there that this team could raise some eyebrows in the ACAC.

“They work hard on the field. In training we’ve had to reinforce certain issues but on the field, come match day they’re there 100%.They don’t want to lose.”

Last year the Queens were able to put a team on the field which were almost all Tier One players. This year the Queens are sporting record of two wins and a draw which has Colley smiling. 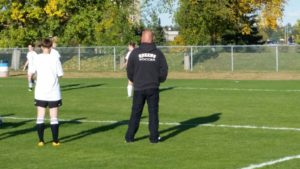 “It’s pretty impressive for these lasses. It’s a testament to how they’re starting to come together. We just need to be a little tighter and learn more about each other,” he said. “That comes with experience which we had last year.”

With such a short season in the ACAC Colley says if a team doesn’t find some sort of meld to keep the together then you can be really messed up and behind the eight ball.

He said after their game against Lakeland he could see the difference as a result of the training and they were starting to get tighter and quicker moving the ball.

Last year’s Queens squad was more readable as to what path the team might follow during the season but this group isn’t quite at that point according to Colley. He says he’s getting production out of everyone and has a team defence which bends but hasn’t really broken at this point.

He says over the years the ability of the players is through the roof compared to what it was with this crop being more gifted these days. 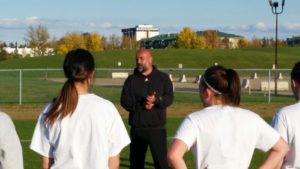 But back to the coach calling it a career at RDC. What is the game plan moving forward?

“Well me and the missus haven’t been on a holiday longer than seven days in 17 years so we will be planning some pretty good jaunts,” he said. “She’s got family in Australia and I’ve always wanted to go to Japan and if you’re going to those places you’re not going for seven days.”