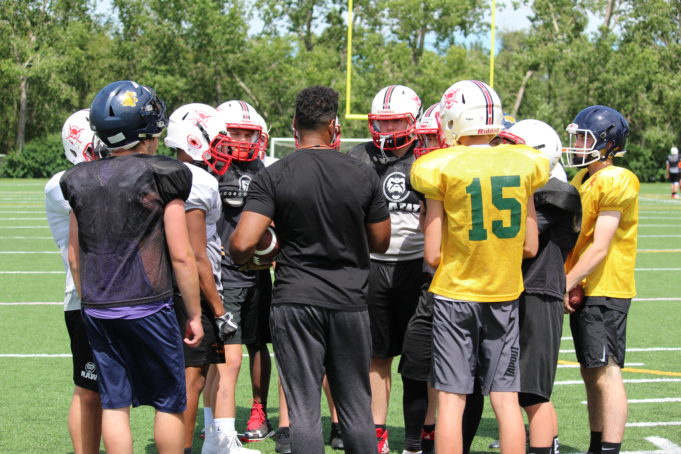 It’s not your typical summer camp for the kids. Instead of hiking, biking, crafts and other activities, more than two dozen kids in Red Deer are running pass patterns, learning to tackle properly and getting better at playing football.

RAW Sports has come to town for a week-long camp where 10-18-year-old players will get a football education to take back to their respective teams.

One of the coaches is former University of Calgary Dino running back Anthony Woodson, drafted into the CFL in 2010 by Winnipeg, playing six years with the Bombers, Toronto, Hamilton and Calgary. 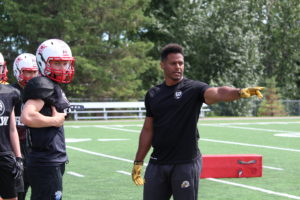 He is joined by his brother Robert who toils for the Argos and former Calgary Colt junior player Todd MacKay, along with other guest coaches.

“I can’t not mention Todd MacKay. For this camp to happen in Red Deer, he’s the number one man. He’s the head of everything. He’s done an amazing job and is an amazing coach,” said Woodson.

RAW Sports (Robert, Anthony, Woodson), the brainchild of former NFL/CFL player (and their dad) Tony Woodson, has become a full-time obsession for Anthony with camps running in Calgary.

It didn’t take long before it was time to stretch out and contact outlying communities to hopefully provide something they may have been missing.

“We’re excited to be out here, our first year in Red Deer. We love the passion out here from every player and the coaches we have talked to,” said Woodson.

The camp being held at Setters Place at Great Chief Park has a mix of peewee to high school players who are getting some great instruction from former players who will share their high-level experience. 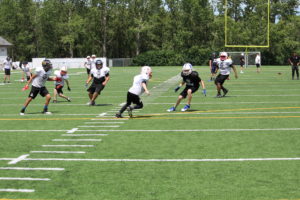 This is a skill development camp which is a full day, starting with the basics for players and coaches.

“We’re going to find out where all our athletes are in terms of the fundamentals, what they know about the game, how skillful they are,” said Woodson. “We start from the very basics, catch up the ones that need to be caught up and from there we grow them(skill-wise) throughout the week.”

One of the big focal points for these camps is making sure all the players understand the safe contact, safe tackling aspect of a game which has had its reputation banged around with concussion issues. 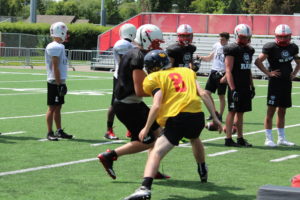 “They will never really interact with each other,” he said about older players hitting the younger ones. “So, they’re sharing the same place but we’re going over different curriculums.”

The daily camp breaks down instruction based on position. So for example, receivers will get the basics about stance, catching, blocking, route-running and reading a defence. 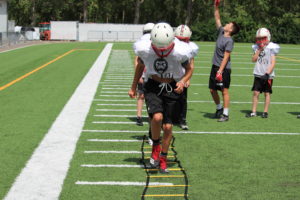 “From there we start working on their footwork and basic things, working on their hands which is the most important thing,” he said. “By the end of the camp, for the ones that are advanced enough we can go into stemming, detailed route-running, working leverages and then reading zones and how to change routes based on zones.”

Woodson is big on teaching the conceptual aspect of football-what is happening on the field.

“I was always someone who needed to know everyone’s job was so that I knew how to do mine the best and I think that’s the best way for a player to learn. So, by the end of the camp I want them to understand what the offensive line is doing. I want them to understand what the quarterback is looking at, what the running back’s job is. What the other receivers’ routes are and how they work in conjunction with each other. So, when they go back to their program, whatever scheme that is, they can ask their coach and learn the plays conceptually and then they can help the team better that way.” 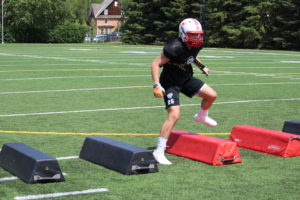 Woodson says once the players leave camp, he hopes they have learned more about the safety aspect of the game but also take away an increased passion for football and become better men and women as they grow.

“We want to be here for a long time so we want to provide something that people will enjoy, and they can see the quality in,” he said.

Young Is Old;Old Is Young

Jim Claggett - March 11, 2017
0
Is it ironic that the newest quarterback in the camp of the Saskatchewan Roughriders is named Young but he really isn’t? I mean kudos...