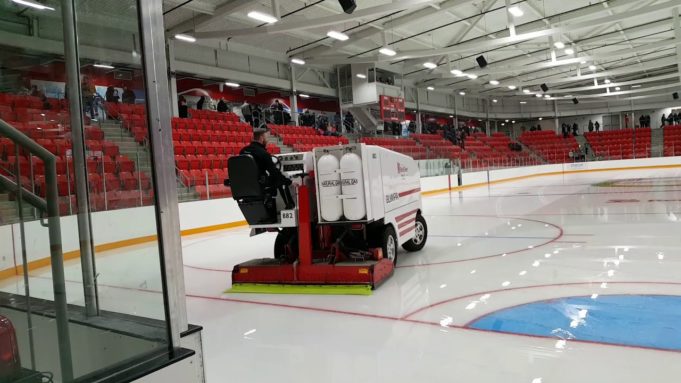 There were plenty of smiling faces and wide-open eyes Saturday in Red Deer as thousands of people took in the shiny, bright Servus Arena for the first time.

The $21.6 million-dollar building came in on budget and ahead of schedule by about six months which isn’t always the norm when these projects are completed.

“I’m so incredibly proud of our city team, of the project team,” said Red Deer Mayor Tara Veer. “There has been such close attention in detail, both in the heritage elements but also it’s important to know in terms of new, modernized elements. This arena meets a modernized sporting standard. It’s built to a higher environmental standard.”

The building marks the start of a new era of hockey tradition in the city. The previous chapter was signed off on when the old barn built in 1952 was brought down in 2016 due to structural issues.

“I had an attachment to the old arena and was disappointed when it was torn down,” said Al Sim, president of Red Deer Minor Hockey. “I loved the history, but the city did an incredible job incorporating the old with the new. It’s going to be one of the best facilities in all of Western Canada for sure.”

The obvious signs of blending the past with the future are the drink rails around the perimeter of the rink which were the old wood benches in another life. The score clocks from the former rink were repurposed and the neon sign which hung outside the rink since 1996 was refurbished up by Darrel Gehring, the man who constructed it in the first place. It now has a home inside the new Servus Arena. 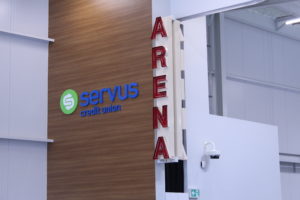 This new facility will open the door to Red Deer becoming host for several high-profile events, starting with the Ivan Hlinka Tournament in August. The Servus Arena will be the site of one exhibition game and six round-robin games.

Sim says RDMH was consulted about some of the design work and the flex rooms were one result of that consultation. It allows home and visiting teams to have a space to kick around a soccer ball, use the floor ladder or do their dynamic workout before a game. The Midget AAA Optimist Chiefs have their own room as well which includes a coach’s room and a trainer’s room. It’s a far cry from what Sim experienced growing up in that rink. 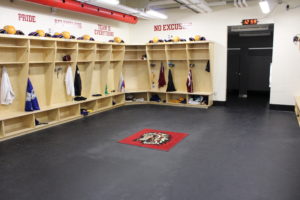 “I remember before we played here crawling under the stands and looking at all the treasures under the wooden stands. It was gross, but you’d find money and stuff people dropped. It was hilarious,” said Sim.

Those wooden stands were painted red and more than one patron would go home with red stains on their jeans but that’s all changed with the new seating in a climate-controlled atmosphere. 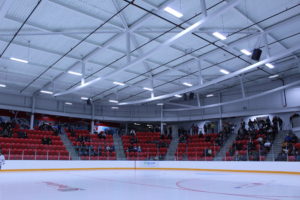 “The memories go back to when it was colder in the rink than it was outside and the frost on the walls,” said Ferchuk. “It was the focal point of a city which was at that point about 40 to 45 thousand people. So, lots of good memories whether you were a hockey player or a hockey fan you still came to the Red Deer arena.”

Ferchuk says the old rinks always have that feel of being home to local teams and he credits the designers of the Servus Arena for incorporating that in some way.

“It’s a new building with lots of great seating but it still has that intimate feel to it. I’ve just been in it a couple of hours and, so I think it’s going to be very easy for our young people to feel it’s home and that’s going to be a big thing.” 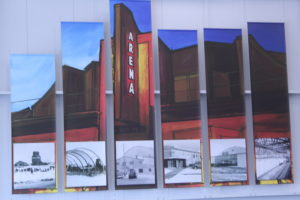 Ferchuk was part of the hands-on group which built the first RDC Kings dressing room on the west side of the old arena.

“I saw this as our home so when our opponents came here they were our guests, so they would have the larger dressing room. We would give them the better facility and that went on for a few years and then Don Moore, our old recreation director came to me said, we have some space under the seats there and we’re not going to do anything with it so do you want a dressing room?”

He says they rented jack hammers to get through the concrete floor and put together what was a comfy room for the local team. He certainly likes what he saw in the digs.

“I think it’s a fan-friendly facility and I think people are going to enjoy being in here.”

Tom Bast remembers playing in the former arena with the Border Pavers, a senior league team back in the early 1980’s and visiting teams didn’t have it easy.

“It was hard to play in,”said Bast. “There was a lot of history with the Red Deer Rustlers. They had a big, strong, tough hockey team. Every time anyone came into Red Deer they knew they were in for a battle and it didn’t matter if it was Midget AAA hockey or senior hockey or the Red Deer College Kings at that time.”

Bast says local teams will be able to create the same hard to play in conditions at the Servus Arena with skilled, speedy teams who have passionate players on the roster. 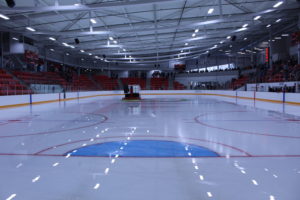 “When I look around here I tell you, this is a place Red Deer is going to be proud of,” he said. “When I see the ice surface, I see the way it is designed and the murals on the wall and a big common area where people can walk, I’ll tell you what, this place is going to be hopping.”

This spring work will start on the parking lot but until then you can grab a seat at the new Servus Arena and see for yourself how it fits.

Olds Grizzlys Not Done Yet

Jim Claggett - October 6, 2017
0
The past is helping the present and paving the way for the future for Olds Grizzlys of the Alberta Junior Hockey League. The junior hockey...