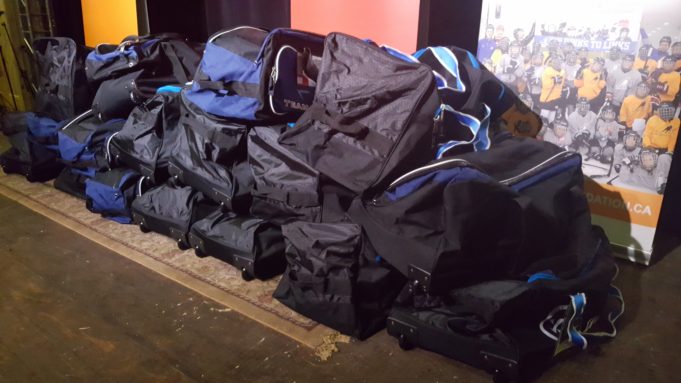 What do you get when you combine hockey, kids, farmers and agri-business? No, it’s not the first line of a joke.

The answer to this question might vary, but on a November night in Red Deer the result was more young hockey players being introduced to Canada’s game.

Red Deer’s branch of BASF (a global chemical company) teamed up with Hockey Alberta in a joint effort to show appreciation to BASF customers while giving back to the hockey community.

“Well I think hockey is pretty important to all Canadians,” said Tess Blomme with BASF in Red Deer. “It’s a good opportunity to give back to the community and showcase that with these growers who would be very supportive of hockey.”

The evening featured 17 empty hockey bags and tables full of equipment. It was a decision by a company to be involved in the community beyond being a business.

“The goal tonight is to get farmers involved,” said Blomme. “They each are given an item to place in a bag and there’s 17 bags that will be filled with hockey gear that will end up going back to Hockey Alberta to be given to kids in need.” 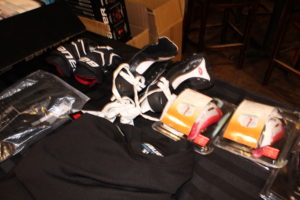 The night came together with a partner, Kids Sport Alberta which works in somewhat the same realm as the Hockey Alberta Foundation. 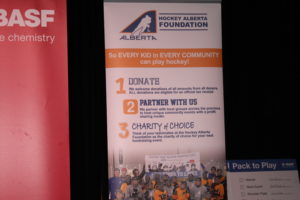 Through the Foundation there is a grant program, “Every Kid, Every Community” which gets kids involved in hockey around the province. In this case, community groups were the ones who vetted the applicants for the hockey gear and then staff/volunteers with the Hockey Alberta Foundation made the best decision as to who got the bags.

“This equipment will be going to a group within Red Deer. Kids that otherwise wouldn’t get to play hockey will get the chance now through the donation of equipment and fees through our grant program,” said Tim Leer, Executive Director of the Hockey Alberta Foundation. 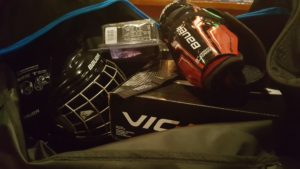 These young hockey players between the ages of five and seven years old could eventually be suiting up for teams within Red Deer Minor Hockey some day. For now, it’s the baby-steps being taken to expose them to the game and see where it takes them.

“It’s important because it gives us a chance to grow the game, give kids an opportunity to play,” said Leer. “Maybe regular minor hockey might not be an option for whatever reason but if we get kids playing drop-in hockey once a week, whatever it may be, kind of alternative hockey programs, that’s what we want to do,” he said. “That’s where groups like BASF and their support helps us get more kids in the game.”

The new hockey players will get to try their new gear on for size within a few weeks time.

Jim Claggett - June 28, 2018
0
In a room packed with people you could feel the energy. It was all positive. There was a buzz a person could feel as...