The discussion around mental health issues has been in the spotlight more in recent years, but the light got more intense with the arrival of COVID-19.

Sadly, there was no shortage of stories surrounding people dealing with dark thoughts and some failing to get out of their troubles alive. But, these stories are moments when we can and should talk about mental health and remove the stigma-somewhat.

Jones spent time growing up in both Ponoka and Red Deer playing minor sports. Last fall his close friend in Ponoka Sam Neath, passed away. While the circumstances of his death are still not crystal clear, Jones and his friends believe it was likely by his own hand. Shocking news to deal with at such a young age. 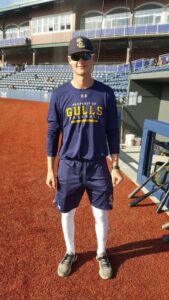 “I was living in Ponoka with my buddies, and I came out into the room, and everyone was crying, and I was like, what’s going on? Somebody told me and I broke down, went back to my room and cried for hours, obviously. I was in shock,” he said. “The first day it’s weird because you don’t know how to react. I feel like I should be crying but you’re not, then you do.”

He readily admits having his friends right there was a huge boost as they lifted each other up while dealing with such a tragedy.

“When it happened, everyone contacted everyone else to make sure they were okay.”

Jones met his friend during Ponoka’s Blackhawk Hockey School and they bonded almost right away. It was one of those connections where you immediately feel a friendship could be cultivated.

“He was just super out there. He didn’t care what anybody said. Whatever. He just wanted to have fun and always had a smile on his face.”

This is what makes his death all the more troubling for Jones. Here was this young, free spirit athlete with so much more of the world ahead of him than behind. Then the second guessing began for him.

It is a situation which has been happening too often and pulls back the curtain on just how little we really know about mental health issues. Jones say you hear about these situations involving his age group but until it permeates your own circle of friends you are basically in the dark.

In honour of his buddy Jones wears a band around his wrist. It was something the group of friends were eager to do, and they passed them out to as many people as they could. For him, it’s a constant reminder of their friendship and who Sam was.

“Every at bat I look at it and it’s just a quick little thought about him. That’s all I need.”

He said he can see himself talking to athletes younger than him about the subject, more so along the lines of how it can affect other people and how he handled the loss of Sam.

“Those things happen, and the biggest thing is find a way to work through it in your own way.”

Keep the talk going and at the very least there is value in discussion which may just lead to some answers.

Golf Is A Game For Everyone-Almost

Jim Claggett - August 17, 2019
0
For this weekend, Red Deer is the centre of the 18U AAA baseball world in Western Canada. Teams from Manitoba, Saskatchewan, B.C. and Alberta are...