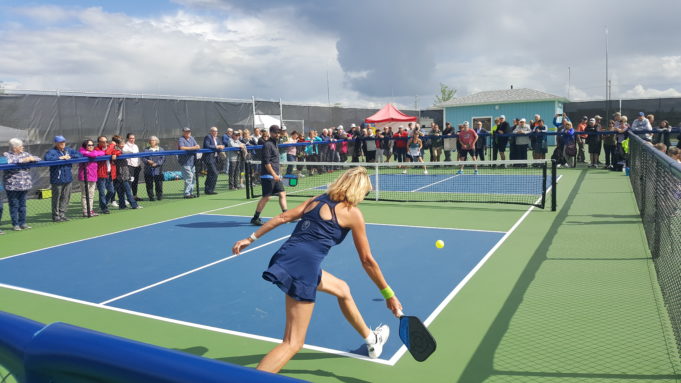 Court is in session for Red Deer pickle ball players and they can be proud of the new digs.

It is the culmination of a dream and plenty of hard work started in 2010 by a handful of pickleball enthusiasts in the city.

“There was a small group of us that approached the City of Red Deer, we were looking for a place to play,” said Val Vollmin, Past President of Red Deer Pickleball. “At that time, they didn’t know what pickleball was, so we did a demonstration of the sport at the Collicutt Centre.”

The small club with a little more than two dozen members started playing in the Westpark neighbourhood on tennis courts which they modified.

In 2013 a not-for-profit society was formed and Vollmin says things then got serious about looking for a place to play on actual pickleball courts.

The love of the game was the driving force behind the efforts to get a home for pickleball, a sport which has an athletic component as well as a real sense of community to it which makes it so addicting.

“There’s such a social aspect to the sport. It’s just a lot of fun and a great group of people. We have a lot of fun.” 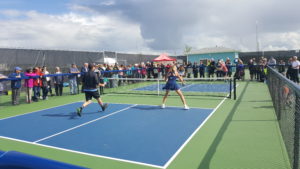 The new courts are all she imagined nine years ago, and she figures they couldn’t have done anything different to the courts. She and husband Gene spent time visiting other cities with pickleball courts, gathering information.

“We spend our winters down south so we play pickleball all over Arizona so we’ve seen a lot of different facilities so we would notice what we liked about some and what we didn’t like about some and we tried to bring that back to what we thought we should have here,” she said.

The City of Red Deer budget for the courts was $1.35 million and the Red Deer Pickleball club must put in $100k of that plus the club kicked in $60k to build a washroom on site.

The game has the reputation of being one for the senior crowd but Vollmin says she sees that demographic rapidly shifting.

“There’s more and more younger people getting into it all the time. It’s coming. It’s changing.”

What is also changing are the number of members in the club.

The new courts will certainly help in attracting those numbers and maybe attracting major events. There is a large tournament planned for August and potential bids to go in for national tournaments as well.

In any event, what ever is hosted at the new courts, players will be impressed.

Jim Claggett - September 28, 2016
0
A dollar here and a dollar there can add up quickly. It’s one of the many ways the Canadian Tire Jumpstart program raises money...