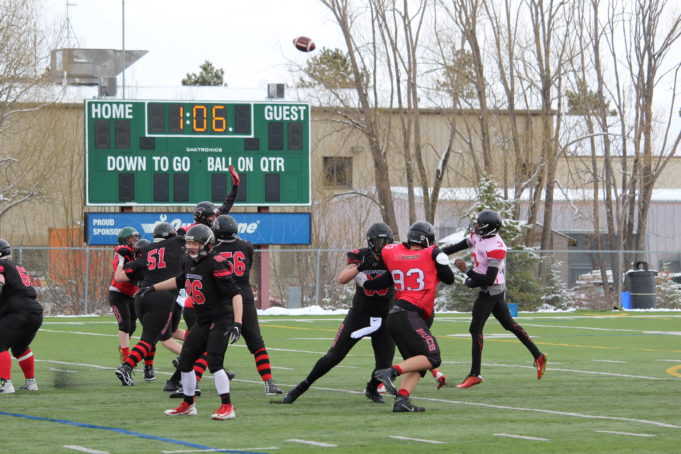 After a handful of practices and a Black versus Red scrimmage Central Alberta Buccaneers coach Gary LaGrange has a vague idea of what he can field this year in the Alberta Football League. But there are some issues which need attention-and some bodies.

“I’m seeing timing issues, number issues. I am seeing new faces for the first time today,” he explained following the inter-squad skirmish on May 4.

The first-year coach is taking baby steps to get this version of the Bucs ready for the regular season and it starts with installing seven plays which the offence will know inside and out before the play book gets expanded. 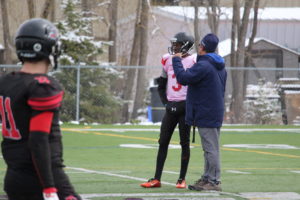 “The thing about it is they’ve all played a little bit of football. They’ll pick it up quick if they’re here but it’s the timing that’s causing the issues,” he said.

Early in the year the defence is a little bit ahead of the offence right now and causing some confusion for linemen and backs as to who to block, he said.

“There’s progress. It’s just a little slower than I anticipated,” he said.

He’s still missing three offensive linemen which were there last week, and LaGrange feels it all starts with the hoggies. 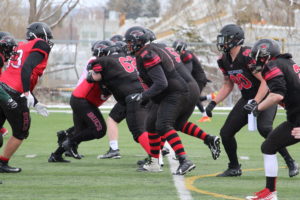 “I’ve got a running back or two and I’ve got some good receivers and there’s some defensive players who are going to be on the offence side too to fill in but if we don’t get a good o-line and get them out and in unison then it’s big on big and power I stuff, deception a little bit and there goes the zone read,” he said.

At this scrimmage there were two quarterbacks taking reps. Jarrett Burzuk who was with the team last year and newcomer Mustapha Yekini who played in high school programs in Grande Prairie, Texas and Idaho. 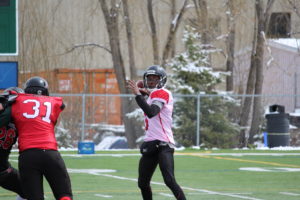 LaGrange says there are other qb’s rumoured to be coming to play but nothing firm on that count to this point. He does like what both Burzuk and Yekini can bring to the offence, either zone read or spread. A mobile quarterback is a key component for the zone read, he said.

“I think we go from the bottom up with him (Yekini). He’s got a great arm and he can run so that is bonus, bonus,” he said. “Burzuk is steady there and we’ll probably be running a lot of spread and he’ll be comfortable in zone reads though because he can run and he’s smart too.”

The consensus is Fort McMurray is the team to beat once again and LaGrange says the Bucs will be right in step with the Monarchs. He’s been told by his players they have the horses to run with Fort McMurray this season

“I’ve got to believe them because I have seen some of the athletes there and it’s just one or two key players that will make it go,” he said.

The Bucs open the regular season on the road in Calgary against the Wolfpack May 25th and then return home to face the powerful Monarchs June 1st.

Bucs On The Road To AFL Final

Jim Claggett - August 27, 2015
0
The road to the Alberta Football League final was going through either Calgary or Fort McMurray for the Central Alberta Buccaneers. That was a...