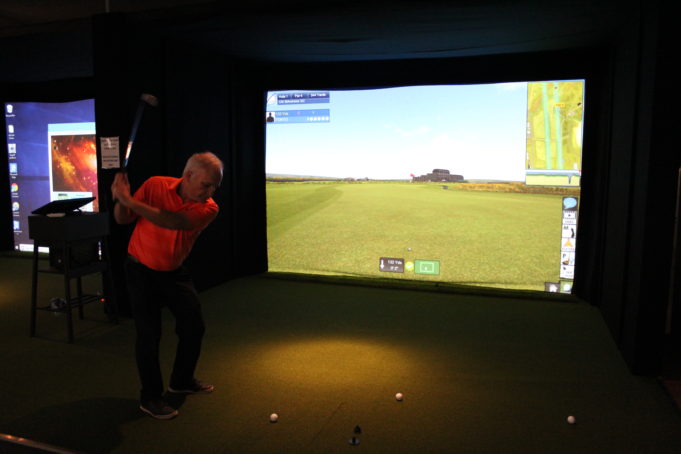 Necessity is the mother of invention. A need or problem encourages creative efforts to meet the need or solve the problem. This saying appears in the dialogue Republic, by the ancient Greek philosopher Plato. I don’t know if Plato played golf or not, but his quote fits the mind set of so many golf courses in Western Canada these days it makes your head spin.

Many are re-inventing themselves on some level to bring in paying customers to fill tee sheets but also to be at the course for events outside of golf.

This is the scenario at the Ponoka Community Golf Club which recently took the wraps off of two state- of- the- art golf simulators .

Head professional Rob MacPherson says the 2018 golf season was the push he needed to get this off the ground. It was the shortest golf season he can recall in years with basically 120 days of golf played at Ponoka.

In a normal year he said they might see up to 170 days where players could be out if the conditions were good in April and lasted until October.

“This year was basically May 1st to September 8th which was really our last golfable day. We had a couple of other days but no weekends in September.”

In Alberta golf is essentially a seven to eight-month business but with this option available to golfers MacPherson says he can keep key staff working and provide cash flow for the course.

The Frosty Divot, as it is called, has built in cameras to record a swing which means lessons can be taught in the warmth of the clubhouse when the weather outside is frightful-in other words, winter.

“It’s got all the capabilities on the driving range to monitor club head speed, launch angles, spin rates of the golf ball. We train on here, we can fit golf clubs. We can do all kinds of things,” he said. 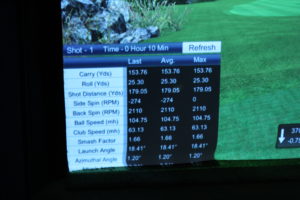 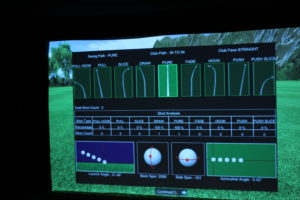 They are built by Cosmos, a company in South Korea where a large proportion of simulators world wide originate from.

“It plays just like regular golf,” said MacPherson. “You pick your tees, you pick your golf course and the difficulty you want to play at. You can set wind and weather conditions. For instance, I played Augusta in a snowstorm the other day.”

The user friendly machines allow you to play 18 holes as a foursome in about three to four hours which means he can handle four bookings per machine each day. There will be a limited food and beverage menu available when the machines are booked.

MacPherson says this can be more than just playing a course you may never get to experience for real. Players can set the screen to try some games like a closest to the pin competition or long drive.

“There’s also some target games (similar to the popular Top Golf) for the kids and adults, almost like a shooting gallery so lots of entertainment there.” 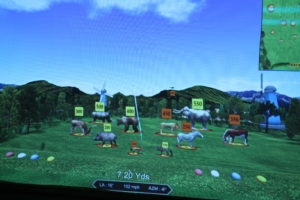 There have been other simulators in the past which have made the claim of providing a “real golf experience” but the consensus is most fell short of hitting that mark for various reasons. So why is this different?

MacPherson has played those simulators and explains for the most part you were not playing a golf course but instead playing the screen.

Players have about 50 golf courses to choose from including St. Andrews, Pebble Beach, Hazeltine and many more from around the United States, he said.

“Nothing from Canada yet. Apparently for next winter we’re going to map our course and get it put it on there. They can do that through Google maps and GPS.”

Putting has always been something these machines fail to duplicate with any accuracy. You might recall some versions where you were putting to a hole from a letter of the alphabet painted on the floor or some other method. With this machine there is 13 feet from the hitting area to the screen. Once you have reached a green it will tell you how far it is to the hole. So, for example, if you have 25 feet then McPherson says you must hit it on line and hard enough to roll 25 feet. 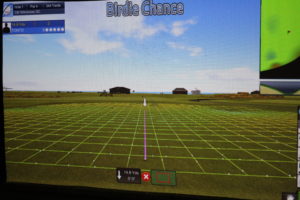 “But this is about hitting the ball and so putting isn’t such a big thing,” he said, adding you can set the machines to allow for players to pick up within say six feet of the hole. “It’s all about exercise and people hitting the ball.”

This could easily be a yearly operation with players using the simulator on days in the summer when the weather may be a little on the wet side. The members can use the machines of course but the general public is welcome to take a swing as well. 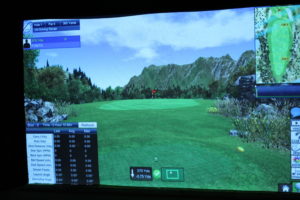 “I think the ones that aren’t in Arizona, even if it’s once a month to hit balls and when we get into March and April it will really ramp up because people will want to get their swings going for golf season.”

It is being viewed as a game-changer for the golf course.

“Every winter golf courses are like squirrels. They put away money all summer and hope but this summer we weren’t putting away a lot of money, but it was o.k. until the end of August. Then September and October everybody was bleeding red,” said MacPherson. “This will generate a positive cash flow in the winter time, enough to pay some wages and keep our utilities paid.”

He feels the course will be able to start the spring in more positive cash flow position versus leaking all winter.

Prices for the simulator are weekdays before 4p.m. is $30.00 per hour divided by how many players you have. After 4 p.m. you are looking at $40.00 per hour which covers weekday evenings, Saturday and Sunday.

It is worth giving it a swing at least once before you hit the fairways for real and the bonus is you won’t lose a ball.

Jim Claggett - October 11, 2019
0
As far as golf courses go, Gamble Sands near Brewster, Washington is relatively young, having opened for play in 2014. However, it hasn’t taken long for...