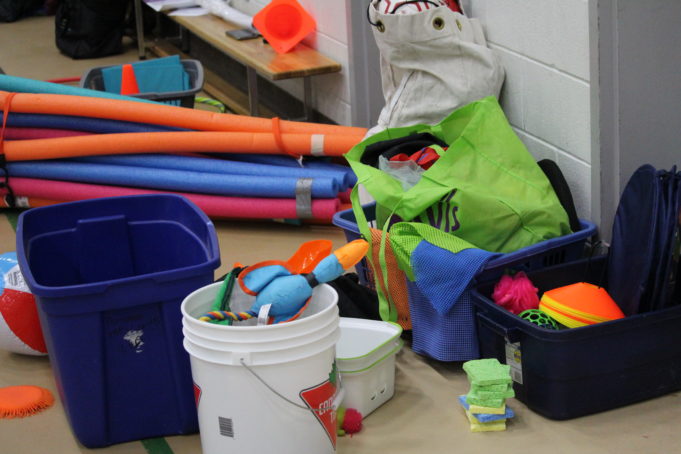 It’s a different approach to the way sport, community, education and recreation delivers programs and it’s happening in Red Deer.

The program is called “Play6S” and the target group is families, so they can bring their children who can experience movement in play. Sounds simple enough but there is more under the surface of this statement.

“The bottom line is the kids we invite and have in the program have some indication of a physical or cognitive or sensory social/emotional behavioural difference,” said Brandi Heather, Chief Knowledge Officer with AMPED2PLAY INC. whose background includes the National Coaching Certification program and physical literacy programs. “Those kids come here, and they bring their family, their siblings and friends and everybody plays together.”

It’s a place where the kids can feel safe, able and connected, she said.

The setup in a school gym was simple with items scattered around the floor and while it might appear to resemble a teenager’s room there is a strategy. It’s setup so everyone finds a level of success when they start playing. 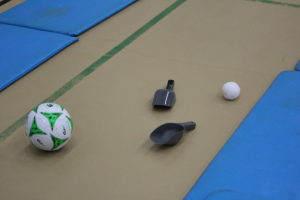 “So, whether it’s a sensory cue that helps them to align themselves to the floor or a noise in the specific equipment, what we’re trying to do is keep kids with disabilities active and moving,” said Heather.

The goal is to get them interested in some form of active living with the hope of it sticking with them for a lifetime, not just a moment.

“People stay in sport and activity because they love it and it’s play. That includes everyone,” she said.

Heather says many of these kids come armed with a negative memory or connection to movement and play so this program may help rebuild confidence.

Through the program teachers, coaches, rehabilitation professionals, health care professionals and recreation providers can learn how to create inclusive environments in which kids of all different abilities can play in that space, said Heather.

She says teachers and educators are excited about the program for good reason.

“It’s a very simple way to consider that what happens in the classroom, what happens on the playground and in the gym settings and they’re looking for ways they can do better at diversity and inclusion,” she said.

There is a noticeable lack of typical sports equipment in the room which may seem strange at first but there was still social interaction and activities you would see in traditional sports.

There is some throwing, passing, kicking and other opportunities for the kids to move and be successful. It simply gets them moving. 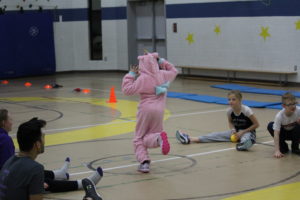 The kids get to decide how they will use each station. At one station there maybe a choice of a football, a ping pong ball or a stuffed shark. The child decides what item they want to use and how they use it, either throwing, sliding, kicking, whatever works that day.

If a soccer ball is placed in the floor, most people would know it has to be kicked but what happens if the ball is replaced by a rubber shark? Heather says there is no pre-conceived idea of what to do with the rubber shark, so these kids can’t really fail can they? 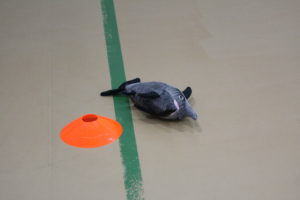 “Nobody can judge their shark playing skills, but they certainly could judge how they kick a soccer ball. These kids don’t feel scared to fail in here and the parents don’t feel that either and those parents have spent a lot of time in spaces where they feel like they’re failing,” Heather said.

In other words, parents are not hovering over their kids to make sure they are doing the activity right and then apologizing. The rule book here is less than a page long, if such a book exists at all.

It works for parents like Brianne Frater who brings her nine-year-old son Parker. Siblings are encouraged to come so his twin sister Karisa is there to play. 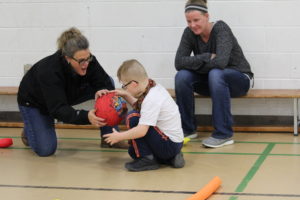 “It’s not forced on her. She is asked if she wants to come and 90 per cent of the time it’s yes,” said Frater.

Parker deals with Coffin-Siris Syndrome One which means he is missing the end of his sixth chromosome.

He has low vision, so Parker likes to check everything out and there is a need for patience until he figures out how far it is and what he’s supposed to do. It helps decrease any frustration he might have otherwise, said Brianne.

On this day Parker showed a high level of confidence by just walking the length of a bench without anyone helping him.

“Parker walks on every single bench that he can find now. That’s his thing because we’ve worked on that skill through all the activities that Brandi has out on and it’s something that Parker really likes to do.”

It may seem like a simple activity but given his low vision issues this would have been very scary for him to have done before, said Brianne.

The door is wide open for any child within this environment. There is nothing we can’t create success from, said Heather. 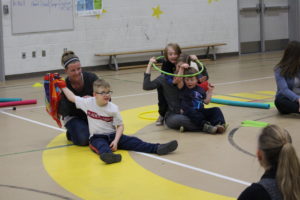 Families of children with disabilities ages 3-6 and their siblings will have eight weeks of programming starting January 17th. In conjunction with Premier Academy Cheerleading and Tumbling there will be eight weeks of Adapted DANCEPL3Y for our older participants starting March 14, 2019.

For more information go to www.amped2play.com

Jim Claggett - January 22, 2016
0
If you ask Shawnee Harle what her message is when she speaks to crowds the assistant coach with our national women’s basketball team is...