Home College Sports A Coach in the Making 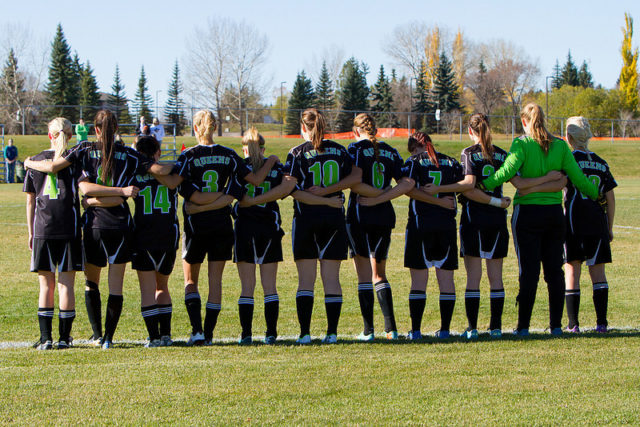 It’s back to school for a former Red Deer College student athlete.

Moira Duley , who has called Red Deer home all her life and played a few seasons with the Queens soccer team, fits the mould according to head coach David Colley when it comes to the CCAA Female Coach Apprentice program.

In order to qualify the applicant has to clear a few hurdles, including not having coached at the college level before.

“She met the hurdles but she’s also shown that she really is keen on coaching,” said Colley.

The 23 year old Duley is currently coaching with the Red Deer Renegades competitive program and has been involved as a technical director as well.

But the chance to keep her link with RDC and the game was something she jumped at.

[quote_box_center]“I figured if I can’t play anymore I might as well come back in any way that I can and it kind of got a little bit bigger than I expected to be honest,” said Duley of the valuable experience she will get under the apprentice program. “RDC is an awesome community to be a part of and I just want to make sure the soccer team succeeds and if I can help out then that’s good for the team and good for me.”[/quote_box_center]

Colley will be her mentor with the RDC Queens program and he feels she is going to work out just fine with what she brings to the table as far as coaching goes.

“She’s played the game. She’s been where players are that she’s now coaching so she’s got an insight that I’ll never have,” said Colley.

Colley says his relationship with Duley dates back to around 2008 when he saw her playing in the Renegades system while he was instructing during a clinic.

He figures that hard-nosed style of play will surface in the coaching version of Duley and that’s a good thing.

One question which will be answered as the season plays out for the Queens will be if Duley is far enough removed from the players she suited up with last year to be an effective coach.

[quote_box_center]“I think she’ll make the link with last year’s players work for her but it won’t be too familiar for her. She’s very professional.” said Colley.” Being an assistant coach will also help because you don’t have to completely cut off the more social side of it because you’re not the head coach.”[/quote_box_center]

As far as Duley is concerned the situation will be uncomplicated because of the leadership role she had as a player. A role she inherited simply because she was older than most of the girls of the team.

“I was almost like a player/coach where I was on the field helping girls , directing them sort of because I was playing centre midfielder which is kind of, well you’re pulling the strings on the field sort of thing,” she said. “I’ve already kind of earned their respect as a player so they’ve already got an idea of what kind of coach I’m going to be.”

He figures a real challenge for the new assistant coach will be restraining herself when she’s so close to the action and not able to get onto the field to do something to help. It’s an assessment Duley totally agrees with.

“You know it’s easy to stand on the sidelines and watch the U-12’s play but what am I going to do when we’re playing ACAC and I’m coaching? I mean you are really involved in the game and you have to stay calm so you maintain that level of cool with your players.”

[quote_box_center]“She will do well with the authority side of things. We all make errors when we start and we learn from doing that and I’ve got every expectation there will be a few downs but I think the downs won’t be that serious and there will be many ups,” said Colley.[/quote_box_center]

Duley says while it might sound a bit cliché she’s looking forward to this intense, high level learning experience.

“It’s something I’ve never done before. It’s really an elite level sport and I think being a part of that and kind of understanding everything it takes to be a coach at that level is going to be beneficial for me to further my coaching career and kind of furthering me as a person.”

The benefit for the soccer program is also there- having a talented player staying with RDC and sharing her experience with the newcomers.

But there is another plus side to the ledger with this apprentice program when it comes to Red Deer College, the institution.

You can mark this one up in the win column for all parties involved.

ABOUT US
Jim Claggett is a freelance sports writer in Central Alberta. Providing you with local, provincial, national and international sports.
Contact us: jclagget@shaw.ca
FOLLOW US
© Copyright 2016 - Jim Claggett