The Central Alberta Buccaneers are six games into the Alberta Football League season, sitting with a 4-2 record which ties them for 3rd place with St. Albert Stars.

A casual observer might think the Bucs coaching staff would be satisfied with their current situation but drill down a little deeper and you will find an identity crisis of sorts.

Hand says the Bucs have flashed their potential all year long when it comes to playing the second tier teams in the nine teanm AFL as evidenced by the four wins to date.

But when they’ve come up against the two powerhouse teams in the league, the 7-0 Calgary Gators and the 6-1 Fort McMurray Monarchs, the Bucs have not held up well when the going gets a little tougher.

So the question is- are the Bucs not able to match up physically with these frontrunners or is it a mental block which crops up when they get down in a game?

Hand believes it’s a mental hurdle for the team and he’s quick with a possible explanation for why that might exist.

He thinks there is something in the fact the Bucs of 2015 have gone through many changes in preparing for this season which includes the time they practice, the days they practice, how practice is run and the influx of so many new faces to the team. 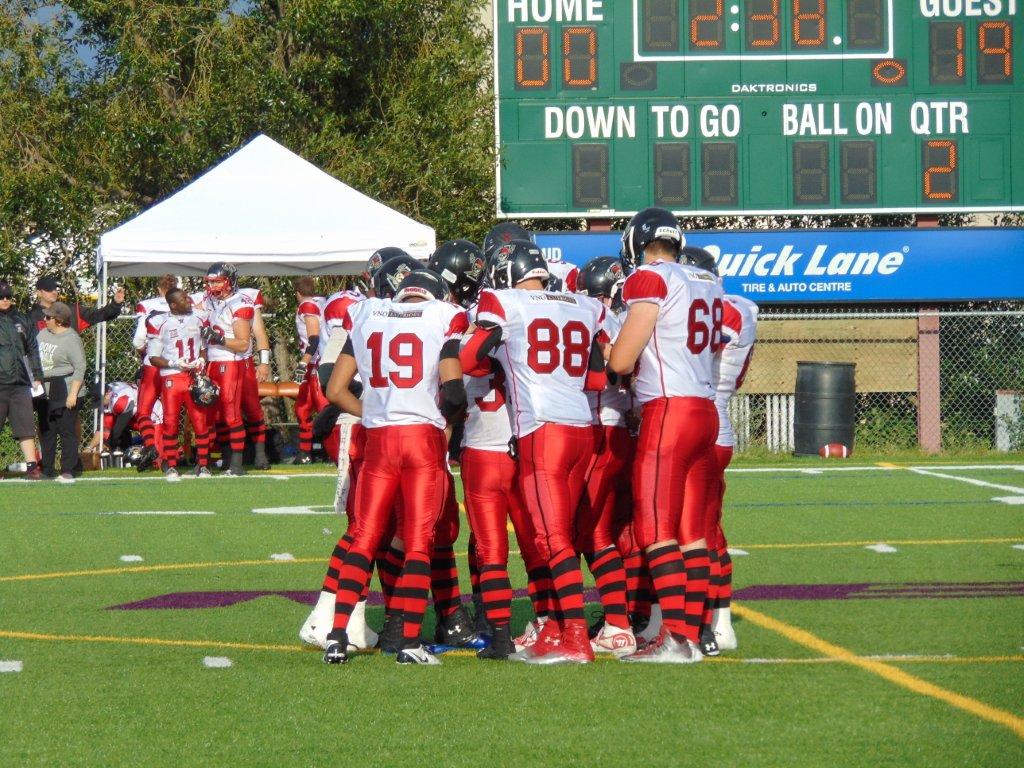 “Forever the Bucs have been a relative old boys club with the same crew of guys and now that I’ve flooded the roster with new guys from different backgrounds, from an identity standpoint we’re not sure who we are yet.”

Hand says the team put practice on hold last week and had a down to earth, adult discussion about what is eating at the players, why they don’t trust each other during critical parts of games and how to resolve any differences.

“It was like talking to kids,” he said. “Some guys were looking at the ground kicking rocks and then one person put his hand up, made a point and the floodgates opened.”

So Saturday at ME Global Athletic Park in Lacombe the Bucs will test their mettle against a team which knocked them out of the playoffs last year. But the reality of the situation is for the Bucs to reach their goal the road travels through the Gators or Monarchs.

“I’m not looking past the other teams but now with our renewed focus we will tweak a few things and sadly St. Albert will have to pay the price for our shortcomings. It’s my expectations that if we come out very aggressive and if we come out with intent to dominate, with intent to win, not just by a little bit, I would not want to be St. Albert right now with the way things are brewing.”

Hand feels strongly he has the horses to run with the big guns but they need to keep the blinders on and remain focused on the task at hand.

“We’re not good enough to be looking past anybody. We’re nothing special really. We have potential to be something special,” he said. “It’s not what you say you’re going to do it’s what you actually do.”

The Bucs and St. Albert tangle at 6 p.m. Saturday August 8th  at ME Global Athletic Park in Lacombe.

Jim Claggett - July 18, 2019
0
It’s not your typical summer camp for the kids. Instead of hiking, biking, crafts and other activities, more than two dozen kids in Red...