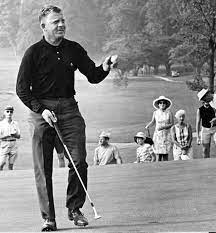 There are so many words to choose from when describing Canadian golfer Moe Norman. Incredible, wonderful, enigmatic, icon, troubled, talented, unique-the list can go further but you get the idea.

If by the time you reach this part of the article and you don’t know anything about Moe Norman, stop and Google him, then come back to the story.

Murray Irwin Norman was born on September 29th in Kitchener, Ontario and he has been referred to as Pipeline Moe for his uncanny ability to strike a golf ball and send it to what ever target he aimed at it seemed.

He has also been called a troubled genius, essentially for the same born with ability to hit a golf ball like no other. The troubled part came with an assumption he was autistic and couldn’t relate to other people.

There have been numerous books and articles about Moe over the years, including movies and now a Hollywood script writer is nearing the completion of a documentary about Moe.

Barry Morrow had a keen interest in Moe because of his ability. It’s not the first time he had done something like this about someone who exhibited characteristics like Moe. Morrow wrote the story and co-wrote the screen play for the movie “Rain Man”, a fictional character based on a real person Barry met, Kim Peek.

“I met him while attending a conference in Texas back in the mid-eighties. He was one of the most interesting people I have met,” said Morrow. “Odd to be sure but his focus was entirely on literature and reading and libraries. He had memorized tens of thousands of books, and not just when I say memorized but sort of, he could pass a test. No, literally every word on every page was committed to memory.”

Morrow said doctors described him as unique in the world and while he had all the mannerisms of someone on the autistic spectrum (hand wringing, inability to meet your gaze) he wasn’t autistic. It was a something many people believed that Moe Norman was in the same category.

“But he didn’t have any of the neurological symptoms,” said Morrow. “After that sledding accident (involving Moe’s head and a car outside his home) he became more of a loner.”

Morrow says after talking to family members they all agreed something had changed in their brother. He became very focussed on just a couple of school subjects, mathematics being one and he taught himself to play cards.

“Maybe not the Rain Man goes to Vegas trick memorizing four or five boots of cards but he was damn good and could beat you at any game.”

Moe started caddying private golf course in Kitchener. He couldn’t help but watch those golfers and started to imitate them in his mind. Morrow says Moe told him how he managed to get his first golf club which started him on this mysterious journey to becoming a golf legend.

“One of those wealthy country club members got so mad after shanking a ball into a pond he threw his club in after it.,” said Morrow.

That night, a young Moe Norman snuck out of his house, pedalled his bike across town, stripped down and dove into the pond. He came out with the several clubs and golf balls.

He then took the club and a ball, took his very unique stance and swung at a golf ball for the very first time and a legend was born that night under the cover of darkness, said Morrow

For Morrow, the documentary is a vehicle to carry the story of Moe Norman forward, past some of the tall tales you may have heard over the years when Moe’s name comes up.

“We didn’t just try to find people who were going to praise Moe and tell us he was the greatest golfer and all that. We wanted people to give us their straight, you know, skinny on their impressions of him back in the day.”

Morrow added, did Moe really hit a wedge off the tee on a par four and then hit the green using his three wood while playing with Sam Snead? Probably, but neither Sam or Moe is around to confirm or deny.

“So, if we have a story about Moe, we will let it unspool but if we have conflicting stories, we will put them back to back so people can kind of make up their own mind,” said Morrow.

The documentary is scheduled to be completed by the end of the summer so watch for that and I will scribble more about my talk with Barry Morrow soon.

Jim Claggett - December 8, 2022
0
For us average Joes and Jills, having a caddie is something which rarely, if ever, happens during our rounds of golf. Could we benefit from...