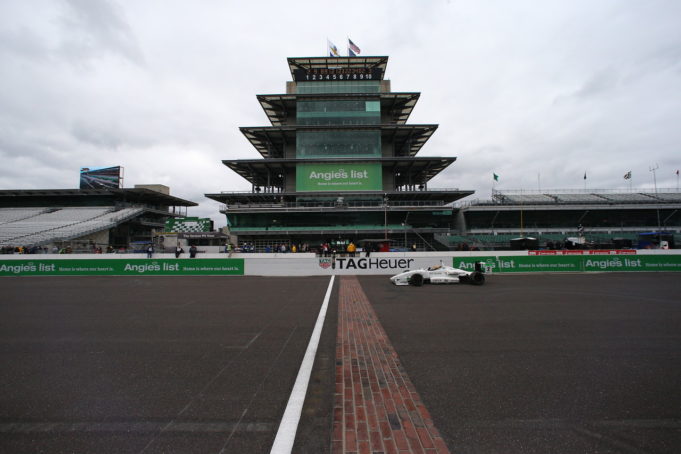 When it comes to the 2016 Cooper Tires USF2000 racing season it was a mixed bag for Red Deer’s Parker Thompson.

The 18 year old driver posted four wins on the circuit, led the field in podium finishes with 12 and was at the front of the pack when it came to the number of laps led during the season. Those are some great ups but like any sport there was a down or two tossed into the mix. 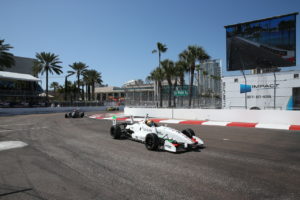 Thompson is referring to not capturing the season championship which meant he fell just short of the six figure scholarship awarded to the winning driver. It was a huge disappointment for Thompson.

“I’ve never teared up but honestly, the last race when my team mate beat me for the championship and was hoisting up the championship trophy and the $400,000 dollar cheque, that was pretty emotional.”

He says he’s not one to make excuses and will move forward from coming oh so close to winning the championship. He says looking back on the year there were two turning points which impacted the final outcome.

The first was in St. Petersburg, Florida when he was run into by another car, scuttling his chances of winning that day. The second was the previously mentioned flat tire in the second last race of the season which flattened his title aspirations. He was running in second spot at that point of the race. 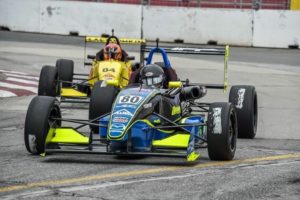 Like any athlete Thompson is spending the off season trying to get better so he remains behind the wheel as a driver. He had a very strong year and was consistently in the top three but 2017 has him gearing up to bring his very best to the track. Drivers are awarded points for where they finish each race so Thompson says he wants to make sure he piles up as many points as possible. It means more stress to be on your game every second of every race.

Another aspect of his offseason was working at getting sponsorship money to continue to race. It wasn’t as simple as signing on the dotted line, shaking a few hands and moving forward. Thompson was hit with a double whammy in 2016. First off, Pro Mazda has changed the type of car to be used on the circuit which every driver has to purchase. That means a bigger budget for teams to get the car and the new parts to keep it on the track. Secondly, the stop on the circuit in Toronto was dropped from the schedule for 2017. 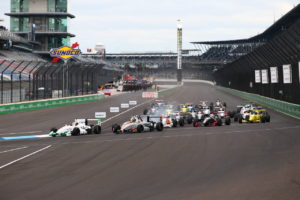 “ Now that might not seem like a big deal to a lot of drives but for the only Canadian or one of the few Canadian drivers on the Mazda Road to Indy, Toronto is where I raised about a quarter of my racing budget for last year. All the Canadian sponsors got on board for one race of the year to help me out.”

The good news is over the holidays he got closer to signing a deal with a new team which will put him back behind the wheel on the circuit in 2017.

“It’s not a done deal but it’s looking very good.”

He says it’s been tough because in this sport the majority of drivers don’t get a deal done until after Christmas which means weeks filled with many a sleepless night. 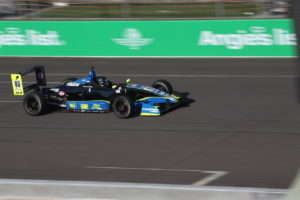 “If you look at the Mazda Road to Indy there’s probably one of like a hundred drivers in North America that sign two or three year deals so everybody does a one year deal. It’s great because if the relationship doesn’t work out you’re not stuck with it for two years but at the same time at the end of the season, good or bad, you’re left with a  hole to fill the following season.”

The season revs up again on March 16th in St. Petersburg and Thompson is anxious to get behind the wheel and put the pedal down.

Thompson Driving For the Top In 2016

Thompson Driving For the Top In 2016