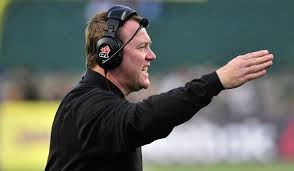 I am not an expert when it comes to contracts and the law. So having said that I might be way off target when I wonder out loud as to how in the name of Hugh Campbell the Edmonton Eskimos organization could sit back and watch as the door hit nine coaches on the butt while they walked out the door? A contract is a contract right? You sign it and get paid to do something for X amount of dollars and X amount of time. So what happened with this bunch of contracted employees? I have no idea.

It started with Chris Jones, a defensive genius to those who know CFL football and apparently he’s also a man who appears to be in the witness protection program. He seemed comfortable in Montreal, staying there five seasons but maybe the bad guys were closing in so off he went to Calgary for two years. Toronto was the next stop and he lasted only one year before landing in Edmonton for a quick two year stay. Now he’s in the land of the living sky as the Riders GM, Head Coach, defensive coordinator, beer vendor, popcorn seller and ticket taker. He might even suit up as Gainer at some point in the season.

He’s a realtor’s nightmare or golden goose. It depends on how you look at it I suppose.

Sure he left a trail of Grey Cup wins but is he looking to work for all nine CFL teams and then call it a career? I have no issue with anyone making hay while the sun shines and Jones is doing just that so good for him. What is puzzling is why eight Eskimo coaches jumped ship and headed to Saskatchewan with him?

One coach said he liked winning games and felt this was the way to keep that winning alive. So is he saying Edmonton won’t win again? Another coach talked about the group’s loyalty to each other. What about the loyalty to the fans who paid those high ticket prices to allow the club to make money to pay your salary?

Opportunity apparently trumps building a perennial winner with the club you just won a national championship with.

So with Jones under contract doesn’t the Edmonton franchise get something in return? A player? A case of footballs? Rider season tickets?

Well they do get Jason Maas to run the ship which has a lot of room on the deck now with the exodus of coaches. Maas must be checking his breath or deodorant as he wonders why eight guys didn’t stick around to work with him but that’s another question for another day.

Some Eskimo fans are already plotting cold, hard revenge when the Riders show up at Commonwealth next season but by that time Jones might be Premier of Saskatchewan and not make the trip.

Jim Claggett - May 7, 2019
0
After a handful of practices and a Black versus Red scrimmage Central Alberta Buccaneers coach Gary LaGrange has a vague idea of what he...