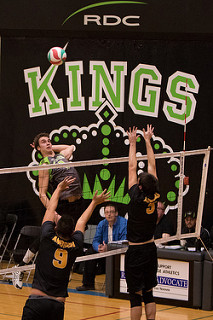 Talking about last season with Red Deer College Kings head coach Aaron Schulha is like opening an old wound and dumping salt in it. When asked to categorize last year he responds with a grimace.

“It’s always a little bit disappointing when you’re that close. We were a couple of points shy in the ACAC final and then a couple of points shy again in the national semi and so we felt that we were right there,” he said. “There’s a lot of things to build on from last year but for us and the way we try to run our program we’re always looking to win a championship and so it was heartbreaking.”

Part of the foundation on which he will build this team are the three returning first year players who hail from the land down under. Australians Regan Fathers, Adam Turlejski and Luke Brisbane whom Schulha says took over the floor reins last season and will continue to be that type of leader.

Brisbane is into year two with RDC and he says it’s certainly more different at the start of this year compared to last season when everything was new for him.

“This year I sort of know before coming in what I need to work on and what I need to do for the team and where the team needs to be at,” he said. “I feel a lot more in control.”

He described last season as close to being a lot better but the plan is to work hard regardless of the near misses last year in provincials and nationals.

He thinks this team will be stronger in some ways as more players are stepping up to take on certain rolls on the team and he is brimming with confidence.

“I think we’re definitely one of the more physical and athletic teams in the ACAC. I think one of the things we’re going to have to work on the most is our first contact,” he said, referring to getting the ball to the net so the big guys can attack.

In the last five years the Kings have gone to the national dance but only twice in that span have they arrived as the ACAC champion and it doesn’t sit well with the coach.

“In my opinion it’s not good enough. For other programs maybe it is but for me it’s not. It’s always a motivator,” said Schulha.

The returning players know the message and to a certain extent, so do some of the new faces on the Kings squad.

A perfect example is Tom Lyon, a fifth year player from Lethbridge College who also played at Mount Royal. Schulha says he came to RDC with the hope to win a championship and end his college career on the highest note possible.

The margin of error in the ACAC these past few years has become as thin as the paper the standings are written on so Schulha says the parity in the league is another factor which should bring out the best in the players as they prepare for each game. He goes in with somewhat of an experienced team and he really likes the depth he has at some positions.

“We have Ty Mormon who plays in the middle and has also played at the CIS level (Brandon University). That’s a different look than we’ve had in the past. We’re really deep in the middle,” he said, referring to Lyon and Terlejski as other players patrolling net.

He says the size and athleticism in the middle means the blocking portion of the game is in good hands and he looks to Regan Fathers and Nic Dubinsky to control the outside hitting game. So the blend of new faces, veterans and experience from other programs looks to be a good recipe for success for the Kings.

“They all know what the goal is and that’s one of the reasons they come here. There’s no secrets.”

The Kings open up at home against Medicine Hat College on October 16th.