Jason Chatwood has plenty on his plate as a high school teacher, an instructor at St. Joseph’s Baseball Academy and most importantly, a husband and father of a young family.

But it is with their support he’s made room on the plate for another helping of being involved. The former Red Deer Rigger is now the first head coach of the Sylvan Lake Gulls of the Western Canadian Baseball League.

“You’re putting your name in and hope you can check off all the boxes. I’m really, really honoured and fortunate to get the position,” he said. “I have a lot of experience here in the community of Sylvan Lake, more so in Central Alberta as I was kind of raised in this area and I think I know what baseball means to this part of our province.” 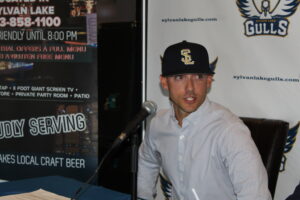 Chatwood says he has thought about how to keep all these balls in the air and says adding the Gulls coaching job won’t cause one of those to hit the ground-the teaching job at St. Josephs.

Chatwood says he’d love to see a Central Alberta flavour with the Gulls lineup in future years which is very possible. As for now, baseball is on his mind as he works towards getting players and filling out his coaching staff.

He says the game has been really good to him and part of what he’s added to it was cultivating those solid contacts while he was playing at Gonzaga University. It’s one of the big boxes he checked off in the eyes of Gulls management. 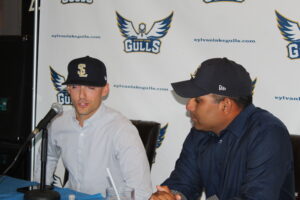 “He’s very well known in the Pacific Northwest in baseball circles,” said Gulls General Manager Aqil Samuel. “Guys he’s played with are kind of spread out in the coaching ranks. Jason gets us into a lot of schools and that’s going to be good as we are hoping to set up pipelines.”

Samuel says Chatwood was on their radar three months ago which allowed them to take their time to get the right guy. But there are lots of former players who bring baseball knowledge to the plate. Chatwood brought more to the table.

“We had a pretty specific criteria that fit the vision that we wanted,” said Samuel. “We’ve got somebody at that age level where he’s mature enough where he can handle the guys on the road, he can put a proper lineup on the field. After talking baseball with him for a while you realize there’s something special there.”

The format of the Western Canadian Baseball League is such that teams will get players from a variety of programs for the summer league. He will be working with players who come from all over, so the coaching approach is rooted in those relationships he crafted down south.

“We’re going to have talks with them (coaches) about what their plan is and what they want their players to do and how they want them to develop over the summer. I think that’s a big thing because they are their guys and we’re here just trying to help them and develop them. So., the goal for us is they’re going to come here and have a good experience and our hope is when they get back to school in the fall, they are better than when they left.”

He admits he is a competitive person so you can be certain the players coming to Sylvan Lake in 2021 will get top level coaching and instruction when they arrive. There’s an excellent chance they will be better when they leave.

Jim Claggett - May 31, 2021
0
It seems ever since they announced the Sylvan Lake Gulls as the newest franchise in the Western Canadian Baseball League, a lot of what...