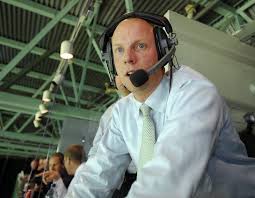 You might not recognize him on the street but once he started talking most hockey fans in central Alberta would know immediately the voice of Cam Moon.

The Red Deer Rebels play-by-play maestro has been bringing games to life on radio since 1998 but this Central Alberta burg wasn’t his first gig.

He wound up his WHL career minding the net for the Saskatoon Blades during the 1990/91 season and he had a plan moving forward. The idea was to use the education money from the WHL and register for the Radio and Television Arts program at NAIT in his hometown of Edmonton.

“I think I went in thinking anything after the WHL that wasn’t pro hockey would be a letdown,” he said. He felt he needed to get on with the next step of his life, but nothing would measure up with what he just went through on the ice. On this occasion, he was wrong.

It exceeded his expectations, and he jumped in with both feet with his hockey background to do colour commentary for TSN who had the junior hockey coverage contract. He added to his resume, working on the national Midget AAA championship which was named the Air Canada Cup. In addition, there was work to be found at the Memorial Cup as a roving reporter.

The door then opened in Nanaimo, B.C. for play-by-play for the radio station and Moon jumped at the opportunity, filling his plate.

“So, I got the job in Nanaimo and worked at the radio station. I did the sports, called the Clipper games. I was the goalie coach for the team for two of the three years I was there and helped with their hockey school in the summer,” he said.

After three years on the island he landed in Red Deer in 1998 to do the play-by-play for the Rebels along with doing hockey broadcast work for Sportsnet which had just launched that year. He and his wife had two young children, so he felt the prudent thing to do was plant some roots in a place he liked, working a job he loved.

He used his experience as a player and a coach to bring information as an analyst on broadcasts but play-by-play was the goal.  It was an easy transition from explaining the game to relaying the game.

“My job on any given might is to tell the story of that night’s game. I don’t know how it’s going to go and it might go good for the Rebels. It might not but there’s always something positive to talk about and it might not be your team. I love being able to tell that story.”

He admits he was always the story-telling guy on the bus during his junior hockey days and really enjoyed that role, so it was a natural fit.

“I remember in even in elementary school I was telling stories, much to the chagrin of the teachers but I had lots to say.”

He had a natural ability to do just that, finding his own delivery style but had influences in his chosen field. They were mostly those veterans of the job like Bob Cole and Danny Gallivan.but, there were others.

He also mentioned Bryan Hall who handled the Eskimo broadcast, but it was the voice for the Saskatoon Blades who made have made the biggest impression.

“Now I didn’t listen to him much because I was in the games but his passion for calling the games, he was such an on top of things kind of guy,” he said of Dennis Beyak, who now handles the Winnipeg Jets broadcast. “I was like, that’s kind of the guy I want to be. I want to be on top of stuff like Dennis is on top of stuff.”

During his lengthy career in Red Deer, Moon has seen many a player come into the city and then leave at the end of their career, eventually.

He tries his best to help these kids feel comfortable to put their best foot forward in front of a microphone when answering questions from reporters.

“Some guys are naturally comfortable. When they first get here, they don’t need any help from me. They’re fine. Then there are some who are maybe a little intimidated by it when there are two or three people who want to hear what they have to say.”

His message is simple-relax, have fun with it and think before you speak.

He gets to interview these kids, and he works hard at getting some of their personality to surface during the process.

He has the best seat in the house to watch these kids play and has the chance to be closer to them allowing for a relationship to be established. The parade of players through the door is lengthy, but some stood out in his mind as people beyond hockey.

That list included players like Bryce Thoma, Justin Mapletoft, Colin Fraser, Cam Ward, Colby Armstrong and anyone named Vandermeer. One player he feels made a huge impact on him and the team was Derrick Meech.

He related a story of when Meech came up as a 15-year-old, played four games for the Rebels during a trip to B.C. and headed back to Winnipeg. When he was being dropped off at the airport all the players got up and gave him a hug because he had that kind of impact in such a short time.

Moon says on Meech’s last day he came into the office, something most players never did, to say his goodbye’s.

“He came up, gave me a hug and I just about cried,” he said. “It took everything in me not to cry.”

There is plenty more about how this professional brings you on-ice action every season, and you may be surprised at the length’s he would go to make sure Rebels fans heard what their team is doing.

The rest of this wonderful journey will be told in part two of this piece. Stay Tuned!

A Little Short Of Super

Things I Don’t Understand In Sports (just the short list)

Jim Claggett - January 23, 2019
0
There are a lot of things in the world of sports I don’t understand. This is just the tip of a Titanic-sinking iceberg. Fresh off...