Football players from ages eight to 18 are gearing up for another season-literally.

Helmets, shoulder pads, pants and jersey’s have been selected and tried on for size to make sure the fit is good and more importantly, it’s safe. 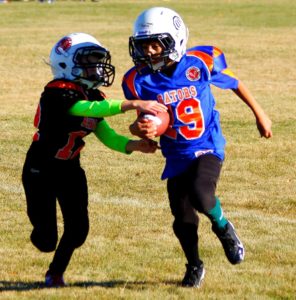 Another very important piece of equipment is also being checked over to make sure all is well-the brain.

Baseline testing has been going on at Collegiate Sports Medicine in Red Deer for about a decade now.

“There was a high need for it in Central Alberta. There’s not a lot of organizations that do it and do it well,” said Meagyn Green with Collegiate Sports Medicine. “It’s such a moving target(concussion), it moves and changes all the time, so you have to put a lot of work into the evolution of all the concussion services.”

The testing covers areas like an individual’s memory, concentration, balance and something called vestibular ocular motor function (essentially checking how stable your eyes are when reacting to movement).

The baseline testing is for those athletes who have not had a concussion or are fully recovered from a concussion and Red Deer Minor Football players have been getting checked over for a few years now.

Green says once a baseline is established then there is a template for the individual, so a therapist can re-test and have a better understanding of the concussion and how it has impacted the athlete.

“If we re-do the test and they test the same way then we might not have to pull them from the sport because they actually didn’t suffer a concussion. Maybe they had poor balance to begin with and they still have poor balance. We want to know that ahead of time, not try to get them perfect balance when they didn’t have that to begin with.”

Individuals under 12 have a modified version of the test (SCAT-Sideline Concussion Assessment Tool) and  those older are given the more standard test. But even though the name says sideline, it’s not just for use at the game or practice where a concussion may have occurred.

Back in the early days of when concussions were being more recognized as an issue the protocol was to have the person go into a dark room until the symptoms vanish. But Green says nobody is ever symptom free and a new aspect of testing has emerged.

While rest and therapy will bring about a reduction in those symptoms, once the athlete gets back into action those symptoms may resurface. Exertion testing is now part of the package.

“What they found is exertion or any type of exercise increase blood flow and causes healing and you feel better,” said Green. This type of testing ensures a full metabolic recovery has occurred and there are no lingering concussion implications that could be worsened through contact.

Baseline testing has been used by football, hockey, lacrosse and volleyball athletes to this point but even people who could get a head injury at their work would benefit from such testing, said Green.

For more information you can visit their website: collegiatesportsmedicine.ca

Minor Football on the Rise in Red Deer

Jim Claggett - September 9, 2015
0
A seed that was planted years ago for young boys and girls in Red Deer has blossomed into a solid base for the sport...