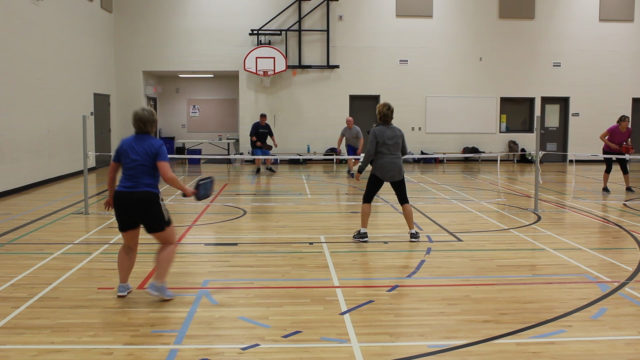 They are called picklers and it has nothing to do with canning cucumbers after a summer harvest.

These picklers are a part of the tsunami which has hit communities around North America-pickleball!

“Believe it or not my wife introduced it to me when we were in Palm Springs about five years ago,” said Peter Nan, a member of the rapidly growing Red Deer Pickleball Association. “She beat me 11-0 the first game, she beat me 11-1 the second game and 11-3 the third game and when we came back I joined the club and I’ve been learning ever since.”

The game got its beginnings back in the early 1960’s when a politician in the Seattle area came home from playing golf and tried to get a badminton game going with his family.

They couldn’t find a shuttlecock, so they grabbed a wiffle ball and lowered the net to compensate for the different trajectory. There you have the birth of a sport.

A local legend says the game got its name from the family dog, Pickles, who would chase the ball, but the facts are a bit blurry surrounding the claim.

What is fact however is how this game has taken off in communities like Red Deer. 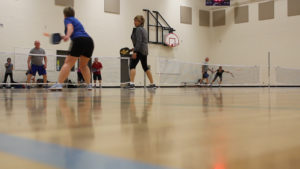 The Red Deer group plays at Ecole Prairie during the winter months as well as indoor facilities in Penhold, Sylvan Lake and Rocky Mountain House. You can also catch a game down at the Collicutt Centre in Red Deer in the morning. When weather allows the picklers to go outdoors there are courts in the Pines for some friendly competition.

About two dozen members made up the club just a few years ago, said Nan. Now, that number sits closer to 250 comprised of regular members and players who just drop in from time to time. The slower speed of the game is the main attraction and reason for the spurt in growth it seems.

“I would say the majority of pickleball players are over the age of 45 and a lot of them have backgrounds in other racquet sports like, badminton, tennis and squash,” said Nan. “Their knees are giving out, they’re a little older and they’re a little more fatigued playing tennis.”

The court measures 44 feet in length and 22 feet wide and you can have doubles, mixed doubles or singles matches at any given time. Players are categorized by ability with beginners coming in at a 2.5 rating and the top ranked players are given a five rating.

“So, if you play nationally, whether it’s for Canada or the United States, you are at the top of your game and that ball moves fast. They get their exercise and their hand/eye coordination is as good as a hockey player.” 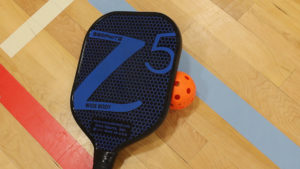 This game is easy on the budget. In order to join the club you basically need a pair of good athletic shoes and a racquet which runs between $80 to $120 dollars.

So, what makes a good pickleball player?

“The ability to run forwards and backwards and hand/eye coordination for sure,” said Nan. “I’ve played beside some very good players and the anticipation as to where the ball is going, to figure out a half a second before the next person, where it’s going to go. It’s no different than any other sport. The elite, the ones that are at the top of their game seem to have the knack for seeing everything around them.” 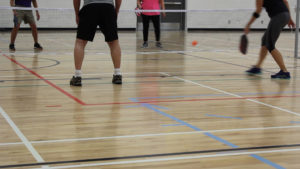 While it’s not a requirement to start playing, having good social skills seems to be a very common attribute of those around the game. Nan says as you sit waiting for your turn on a court there is plenty of time to talk.

“It’s like any sport. You make friends and there is a comradery, for sure.”

One of the side effects of the sport’s popularity in Red Deer has created a need for a bigger home to accommodate the new players. The Pines site has nine courts, but Nan says they are working with the city to get a 20-court site at a location to be settled on soon.

If you are interested in becoming a pickler, Nan says there are times set aside during the summer to give a gentle introduction to the sport for newbies.

For more information you can go to http://www.reddeerpickleballclub.com/

ABOUT US
Jim Claggett is a freelance sports writer in Central Alberta. Providing you with local, provincial, national and international sports.
Contact us: jclagget@shaw.ca
FOLLOW US
© Copyright 2016 - Jim Claggett