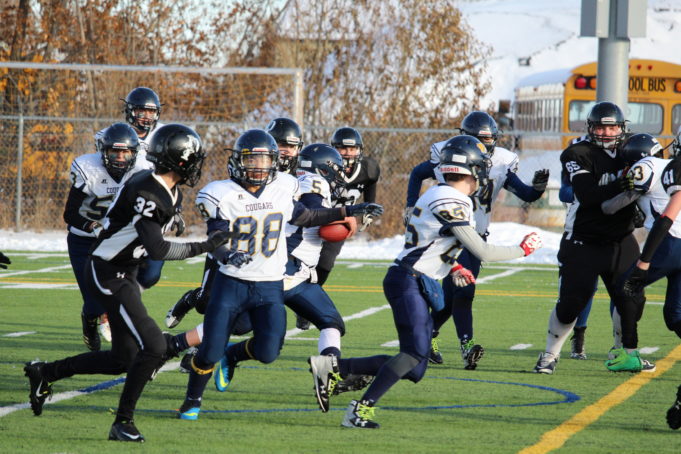 There have always been dramatic turnarounds for sports teams and they vary, depending on the sport, the age group, etc.

No matter what measurement you apply however, the Jekyl and Hyde transformation by the Notre Dame Bantam Cougars football team would rank very high on any scale.

The Cougars posted a 1-6 record last year, winning their final game of the season to avoid the goose-egg. This years edition managed to go a perfect 10-0, capping it off with a 20-12 win over Medicine Hat in the provincial final. Now that is a flair for the dramatic.

“Honestly, what I wanted to do was compete for the league title,” said first year Head Coach Justin Flunder. “That was our goal, to be competitive and just let the boys really believe in themselves.” 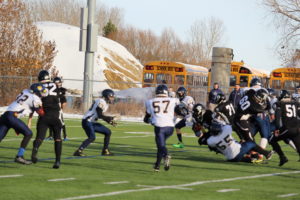 With 20 returnees from the 1-6 campaign Flunder had a group which was motivated to do better and he incorporated a philosophy used by a non-profit group he’s associated with called “Coaching Boys into Men.”

“It’s a leadership camp and it’s based on the premise of team, meaning I can’t do it all myself therefore I need to rely on- I call them all the brothers around you, to support you so you can do the job you can do.”

He said it took about week three into practice with this group before they really started picking up what he was laying downand the culture just got stronger as the year went on, culminating in a very rewarding provincial title.

At the start of the year Flunder handed out cue cards and his players wrote down on those cards what is the record you want at the end of the regular season and we will practice in the way to achieve that,he said. 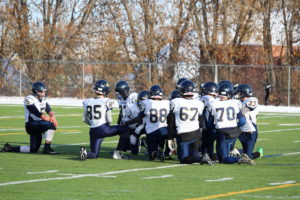 “Ninety-three per cent of the boys said they wanted 6-0 and you can guess, every one of the second year players put that forward. I said if that’s what you want, it’s not going to be easy so here’s what we have to do.”

He admits he had talented individuals on his team but that’s never enough in his view. He refers back to the culture built within the ranks , underlining how no one player is better than the other. Second year players can sometimes lord it over the rookies but that only encourages those first year players to repeat the cycle next season, he said.

He said the level to compete rose dramatically amongst his players, whether it was practice or game. Raising that compete level was the fact it didn’t matter whether you were a first year or second year player, your job on the team wasn’t safe.

Once the perfect regular season was accomplished, the cue cards got broken out again in order to mark down the playoff goal. Needless to say the goal didn’t include a playoff loss and they reached the goal on a beautiful football day in Lacombe. 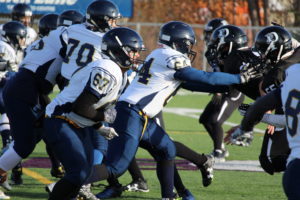 Flunder says his whole purpose as a coach is to be forming leaders within the next generation and it goes beyond just the football field.

He says the coaches and players do hang out as a group off the field which is a key aspect of their success. It’s all about relationship building and it’s something he cannot stress enough as to it’s importance in developing athletes and good, young citizens.

Looking back on a perfect season, it might be difficult to select one aspect which made the coach proud of his group but Flunder managed to narrow it down.

“I think the thing I was most proud of is the way they treated each other.” he said. 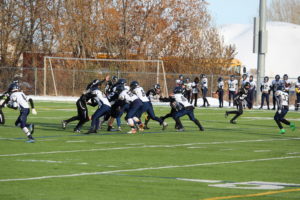 Many times, during practice there was always a strong level of encouragement coming from players as team mates maybe struggled with drills.

“That sense of, we will take care of you. You are a part of this team.”

So with such a strong finish to the year, what does this program do for an encore?

“I told parents for next year, let’s put our expectations a little lower because that’s going to be tough to beat.”

Buccaneers Football On The Move

Jim Claggett - February 22, 2018
0
The Central Alberta Buccaneers Senior football team is heading back to its roots. The Bucs have been playing home games at ME Global Park in...