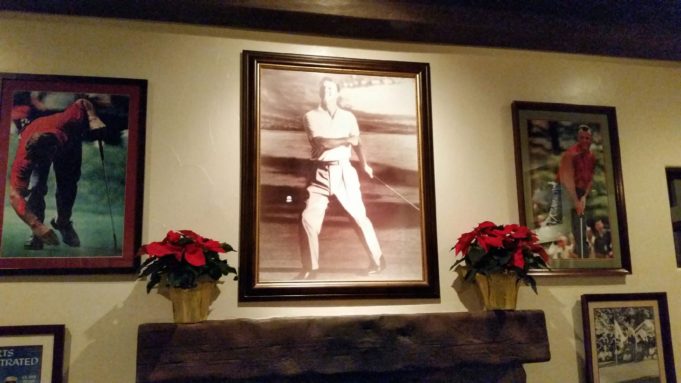 Growing up I knew who Arnold Palmer was but never really grasped the depth to which this man touched the golfing community around the world.

I never saw him play in person but did catch a few of his rounds on t.v. which of course never really showed his magnetism. Sure, you could tell people wanted to be near the King, even late in his career, but I never got to witness first-hand what this man could do with a golf club and how he captured the fans.

The closest I ever got to Arnold Palmer was earlier this December when we had dinner at his restaurant in LaQuinta, California. It was a tremendous experience in my opinion and a walk around the place was memorable. The meal was outstanding and the service spot on but it was the ambience of walking through the restaurant which stuck with me more than anything.You could feel the presence of Arnie in every nook and cranny. 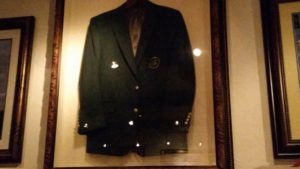 The entire place is themed around Arnold’s golf exploits with a Masters room, U.S Open room and the Open Championship room. We listened to his friend, former LPGA commissioner Charlie Mechem explain the idea behind the restaurant.

“Each of these rooms has photographs and memorabilia from that particular championship. I used to needle him and say if you had just one the PGA Championship we could have had another room,” said Mecham.

Even though he missed the PGA title, Mechem says in his entire career nothing meant more to Palmer than the U.S amateur trophy which he won in Detroit and essentially launched his outstanding career. 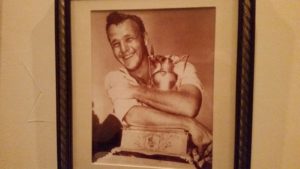 “That was, as he put it, his tipping point.”

All the trophies in the restaurant are replicas which are on loan permanently and they tell but a few paragraphs in the story of Arnold Palmer. Important paragraphs, but this man’s story is not told in Reader’s Digest version but more like a “War and Peace”. I’m giving you what is a mere sentence in that epic. 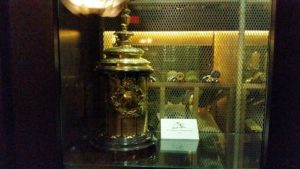 Mecham said when Arnold wasn’t pursuing his passion for golfing and he went after his other passion- his food.

So when the idea of a restaurant in LaQuinta came up Arnie essentially knew the food would be taken care of but he was insistent it be built about five minutes from his home in this desert oasis. No point in having a restaurant named after you and then having to make a long drive to get there. The King still has a table reserved for him in the restaurant which is a nice touch. 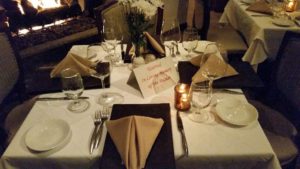 When people ask what Palmer orders at a restaurant Mechem said he’s thinking more along the lines of what people could order at Arnie’s place.

“I think we should tell them he always ordered the most expensive meal on the menu.”

One other little tidbit about Palmer has to do with his expansive corporate image-the logo. The tale is not exactly one of those brilliant moments which is the culmination of a perfect mix of some deep thought, research and common sense. Nicklaus has the Golden Bear, Player with the Black Knight, Norman and his Shark logo.

Arnold Palmer has the multi-coloured umbrella (apart from the popular ice tea/lemonade drink which carries his name). Meachem was in the Cleveland office of IMG president Mark McCormack one day with Arnie talking about what the logo should be and nobody had any ideas at all. None that were jumping off the page it seems.

It seems Arnold Palmer saved the majority of the dramatic moments in his life for the golf course.

Thanks Arnie and the meal was great!

Is It Golf O’Clock Yet?

Jim Claggett - April 26, 2018
0
The year 2018 will be remembered as the one where winter didn’t want to leave, and spring stubbornly refused to arrive completely. While many golfers...